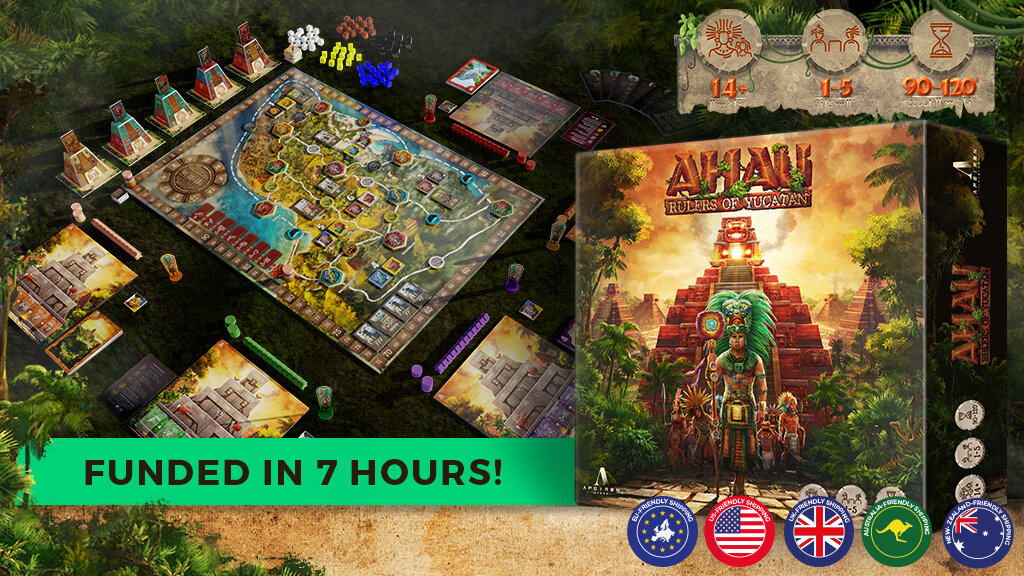 Are there any Kickstarter-only goods available during the campaign?

Our Art Print Pack is exclusive to Kickstarter! We promise to deliver their rewards to backers first, including individual backers and retailers who back on Kickstarter. Any distribution deal will be served later.

How many players does the game support?

Is there any Solo mode in Ahau?

Yes, the game has a full automa solo mode, where you play against King Pakal who takes on one of the six distinct personalities. The solo game has three difficulty levels: easy, moderate and hard.

Why is the game called “Rulers of Yucatán?”

This was actually discussed quite a bit by our team of cultural and archaeological consultants because Yucatán can refer to the modern state of Yucatán located in southeast Mexico which obviously did not exist during the Maya Classic period. The ancient Maya also did not call this region Yucatán, but unfortunately we do not know the word the Classic Maya used to refer to the wider region they lived in.

Many Maya today use the word “Mayab’” to refer to their world but we do not know if a similar word may have been used in the Classic period. There is plenty of evidence to suggest, however, that the Classic Maya simply referred to their kingdom or the lands they lived in, rather than conceptualizing one large region in which everyone lived. Archaeologists have been able to decipher plenty of these ancient toponyms and kingdom names, for example Tikal was called Mutal and Palenque was called Baakal. Yucatán in this game is used to refer to the Yucatán Peninsula, something that modern audiences might be more familiar with and which represents the geographic area within which most of the Maya lived during the Classic period - stretching from the highlands of Chiapas in the west to the Ulua River Valley in Honduras to the east and from the Pacific coast of Guatemala in the south to the Gulf coast of southeastern Mexico in the north.

Good question! When speaking of the people and their material culture, always use “Maya” - ancient Maya, Maya city, Maya temple, etc. The word “Mayan” is used exclusively to refer to their languages - Mayan languages, to speak Mayan, etc.

Where can I learn more about the Maya?

Although we hope to include a small booklet about the history and archaeology that informed many of the design and gameplay aspects of the game as a stretch goal, we also highly recommend a book called “The Maya” by Michael D. Coe and Stephen Houston, which is very affordable, widely available, and in its ninth edition. You might also consider “The Classic Maya” by Stephen Houston and Takeshi Inomata, which is similarly affordable and deals exclusively with the Classic period.

How do you pronounce K’uhul Ahau (Ajaw) and K’atun anyhow?

First and foremost, it should be mentioned that although you might see both Ahau and Ajaw in this campaign and any updates, these are the same word and are pronounced the same. The hieroglyphs of the Classic period recorded a language called Classic Ch’olti’an, an earlier form of the now extinct Ch’olti’ language. In this language, Ahau was spelled Ajaw and thus the latter is the accurate way to spell the word in the setting of this game, the Classic period. Ahau, however, is the spelling for the same word in the Yucatec language of the northern Yucatán Peninsula and reads closer to how the word is pronounced. It is used throughout the game for this reason, to be more approachable and naturally encourage players to pronounce the word correctly.

K’uhul Ajaw (Ahau) literally means “holy lord” but can be better understood as “divine ruler.” K’uhul is pronounced “k-oo hool.” The apostrophe after the “K” is a glottal stop and in pronunciation is almost as if your tongue catches at the back of your throat. “Ajaw” or “Ahau” is pronounced “ah-HOW,” with a short “a” as in “around.”

A K’atun is a basic unit of time in the Maya calendar system representing 20 tuns or turnings of the 360-day Haab’ solar calendar. It represents 7,200 k’in or days, roughly 20 years. Similar to k’uhul, k’atun also has a glottal stop and is pronounced “k-ah TOON.”

Why were the cities on the map chosen and others not?

Chichen Itza existed as a small settlement but only really took off in the 10th century, so right after the end of the Classic period. It is, however, the most widely known and recognizable Maya archaeological site followed closely by Tikal. There is another site near Chichen Itza called Ek’ Balam that was an important city during the Classic period but is much less known than Chichen.

Similarly, Tulum was an important coastal trading port on the east coast of the Yucatán during the Late Postclassic (1200+ CE), however many people know of Tulum, especially if they have ever traveled to Mexico as many popular resorts are found in this area. It was chosen to stay in the game for this reason and to represent the great coastal trade capabilities of the Classic Maya. There was a much smaller and less well-known coastal port just north of Tulum during the Classic period called Tancah that likely served as the port for the great city of Coba, located just inland to the west. Although the game is intended to be set during the Classic period (200-900 CE), you may see us write that the game covers the period of 200-1200 CE to account for the presence of these later cities. The only other city on the board for which accommodations were made is Lamanai, located in modern-day Belize. Lamanai certainly existed during the Classic period, but it was never a particularly large city or overly involved in macro-regional politics. Just to the southwest, though, at the modern border between Belize and Guatemala was a city called Caracol that was a very important center during the Classic period. However, this would have made the board region around Tikal much too crowded so Caracol was scrapped in favor of Lamanai in the name of graphic design. All of the other cities in the game, Tikal, Calakmul, Quirigua, Yaxchilan, Palenque, Jaina, and Uxmal all had significant Classic-period occupations.

How much will I really be paying above the cost of the game in shipping, handling, VAT, taxes, fees, etc.?

Our shipping table on the campaign page includes shipping and handling charges. We are also paying all import fees. Our goal is to reduce your costs as much as we can.

When it comes to VAT, several countries have changed, or are in the process of changing, their rules and laws with the intention of becoming much more reluctant in their enforcement and collection. We will follow your country’s laws and requirements when importing and shipping your rewards to you. Only the actual VAT required by your country’s government will be collected in the Pledge Manager after the campaign.

The price indicated in the pledge levels does not contain VAT, as the level of VAT varies from country by country. VAT will be collected through the pledge manager.

VAT (usually between 19-23% of your total pledge) will be charged at check out in the pledge manager.

What does the Eclipse Expansion contain?

What languages are available for Ahau?

Each copy of the game will come with an English and a Spanish language rulebook without any extra charge. Additionally, you will be able to select the language of the game in the pledge manager.

If we want add-ons, should we increase our pledge value or do this in the pledge manager?

Any of the two options will work. All funds added during the Kickstarter campaign will be available to allocate in the pledge manager.

Am I able to order ONLY the add-ons?

No. You are allowed one copy of each add-on per copy of Ahau – Rulers of Yucatán.

How do I confirm if I’m getting the art print cards add-on for being a newsletter subscriber?

All of our email subscribers who back us on day 1 will receive the art-print cards. If you are unsure, write us an email to info@apeiron.games.

What are the estimated dimensions of the boxes?

If Ahau gets a retail release, is there a benefit to backing this campaign instead?

If you back this Kickstarter in the first 24 hours, you’ll receive the Eclipse Expansion for free along with the core game. You’ll receive your copy first and you’ll have a chance to be a part of the creation process!

Will Ahau go to retail?

We would love that but it depends on distribution, localization agents, and how the game does here on Kickstarter.

If I pledge $1 now, can I upgrade my pledge in the pledge manager?

Will you be offering a group pledge option?

We are currently working on that, and will hopefully be ready to announce something soon.

BackerKit is a service that crowdfunded project creators use to keep track of hundreds to tens of thousands of backers—from shipping details, pledge levels, preferences and quantities, whether they have paid or had their card declined, special notes, and everything in between!

The BackerKit software and support team is independent from the campaign’s project team—BackerKit does not handle the actual reward shipping. For more information about the preparation or delivery status of your rewards, please check the project's updates page.

How does BackerKit work?

After the campaign ends, the project creator will send you an email with a unique link to your survey. You can check out a walkthrough of the process here.

I never received my invitation. How do I complete the survey?

The most common reasons for not receiving a survey email is that you may be checking an email inbox different from the email address you used to sign up with Kickstarter, Indiegogo or Tilt Pro account, or it may be caught in your spam filter.

Confirm that the email address you are searching matches the email address tied to your Kickstarter, Indiegogo, or Tilt Pro account. If that doesn’t work, then try checking your spam, junk or promotions folders. You can also search for "backerkit” in your inbox.

To resend the survey to yourself, visit the project page and input the email address associated with your Kickstarter, Indiegogo or Tilt Pro account.

How do I update my shipping address?

When will my order be shipped, charged or locked?

That is handled directly by the project creator. BackerKit functions independently of the project itself, so we do not have control of their physical shipping timeline. If you want to check on the project’s status, we recommend reading over the project's updates page.

I completed the survey, but haven't received my rewards yet. When will they arrive?

As BackerKit does not actually handle any rewards or shipping, the best way to stay updated on the shipping timeline would be to check out the project's updates page.